It’s 9pm. A little drizing in Tagaytay City. Saw some familiar faces. I was with my student who is a fellow runner and office mate. He said that he will introduce me to his running group and ask them if they can adopt me. Everyone was warm when we were introduced though I am not able to remember all their names.

Rain stopped, I was coughing. Had my cough a few days back amd was on sick leave last Thursday. But I never considered not attending this race just because I  not feeling well. Not in a million years, I thought. This is something I have been waiting for. A turning point in my running adventure.

Clocks ticking. Raim has stopped. All runners did a series of stretching preparations, checked their hydration belts. Their support group is also ready. I am an adopted runner for my student’s support group. Since there were limited hydration stops, it is rrally necessary that you have a support group that will assist you specifically on this this type of rum amd distance.

Hosts announced the start of race, everyone’s excited..discussimg about their pace, their target time and stuff..Since I am used to running alone, i was running at my pace and liberty. Also since i have no gears for night run, i tried to be as close.as.possible to other runners who have their flashlights. 🙂

Since it was cold, I have visualizednin advance where my pitstops (pee stops) will be. My first was in Jollibee Tagaytay, Shell Silang, Fil Oil Palapala, beside the car with umrella (yup you read it right), and last is Philhealth Office. It was approximately 32kms when i feel the need to pee. No gasoline stations along the route thus I was left with no choice. I went to one race marshal who is sitting beside his car asking him if I can hide behide the car too pee. He told.me.sure, I have an umbrella here to cover you. 🙂 It was double happiness. Haha. The feeling that you are relieved after peeing and the feeling that you no longer worry if you will pee on your undies if your bladder can no longer hold it. 🙂

The support group was so helpful as I had 3 liniment stops: 2 from the group who adopted me that night and one from another group. I can never thank you enough for your help. The liniments really helped prevent the cramps from happening. I was so happy that I didnt experience any cramps on my run.

I started doing.my 4-1 interval after 21kilometers to ensure that I will have the needed energy up to the 53rd kilometer. I am so happy with my pace and interval as I was able to overtake a number of runners. Many even told me “ang lakas mo” (you are a strong runner) probably because i am able to stick to my 4-1 interval.

48th kilometer, it started to drizzle.and shortly the rain came pouring. My.legs are telling me to stop. That was my wall. I was battling with my legs to run again but it wont cooperate. I have.seen many runners walking. We were chatting about how far till the finish line and how each of our status is. I reset my garmin to so a 2-1 or 1-1 interval just to continue running. Good thing my legs finally.cooperated. i was in dire need of water as I was already dehydrated on my 48th km, good thing I saw another support group and asked if they can spare me.water. It was heavenly. Ice cold water was poured in my container. Thank God they were there. I was already thinking of asking the residents if they can spare me water.

Running my 1st ultramarathon is a humbling experience. I realized that I really need a support.group to assist me during the entire run. It would be so difficult.to so it on your own. At the same time, the whole running community was so helpful and warm.and the gentlemen proved that they are indeed gentlemen specifically when the time that I need to pee at the back of the car. It was definitely the hardest and nerve wracking, “I thought I will be insane” run to date. But it was definitely worth the experience. If I will be asked if I will be willing to do it over and over again, I will respond with a strong yes and will definitely further increase my.distance. This type of race isn’t really about speed. The tag line should be – “Tatagal ka ba?”. 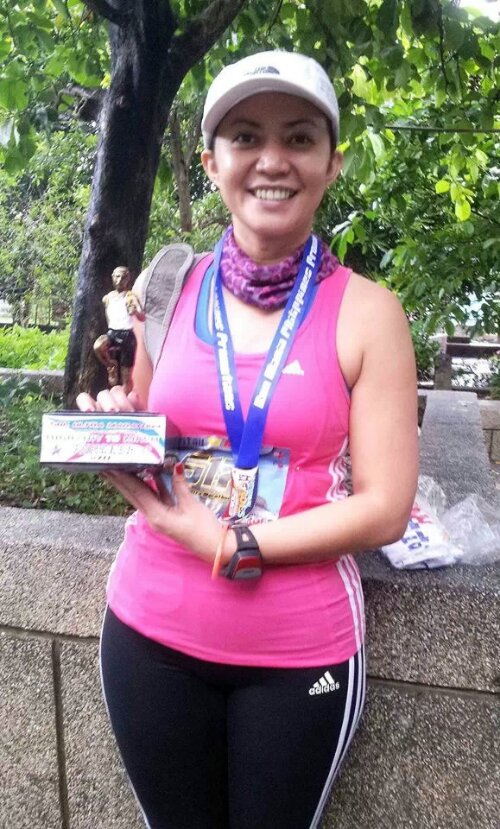 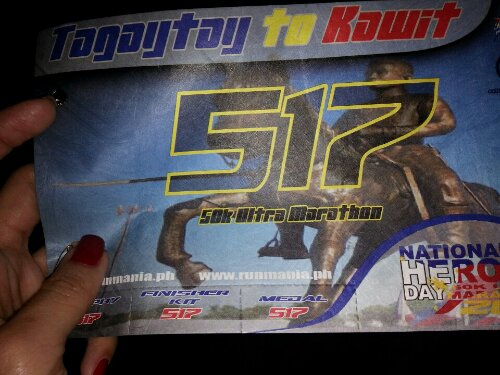