A few years back, I thought that running for more than one hour is just crazy. I don’t understand why one of my best friends join running events and run for at least an hour. I always ask him, how do you manage to do that, more so, do half marathon. He mentioned about runners high and other related stuff. When I did my first 10k, that was the time I started to understand him, and everything was history.

I initially planned to do my first full marathon almost 1.5 years ago – it should have been for Milo Marathon in July 2011. I really prepared well during that time, following my training plan but when I was about to do my 32k run, my iliotibial band didn’t cooperated. It was July 3 (if I remembered it correctly) and it was a 21k run which i joined. I did my pre-run and planned to do post-run to complete the 32k requirement for my training plan. It was on the 5th km when I started to feel the pain, tried to walk and run but on the next km, I was having a hard time walking. Thus I ended up not finishing the race, and the following day, I was in ER as the pain is just unbearable, and I really had a hard time with all the movements that I do. In short, I failed to do my first full marathon on the target date I initially set. I was really broken hearted because of this. My full marathon goal was further pushed back and I didn’t thought about it for a year, until… today – Condura Skyway Marathon… 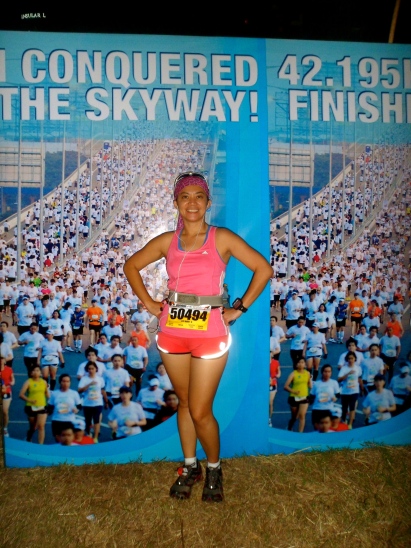 This is how i looked before the race. 🙂 i tried to take  my picture and see how it will compare to what I will look after the race. This is also the first time my family is with me during a race.

All my pre-race jitters were gone as I walk towards the starting line. I should be on Wave A but a friend of mine is on Wave B thus I just decided to join him on Wave B. I met his friends as well and all of us did a 4-1 interval. I thought a number of runners pass thru us on our way to Buendia. But I didn’t worry my, I thought that I am reserving my energy until the end of run.

Our group was disbanded and I ended up running alone in the last 21km. I take one kilometer at a time, approximating how much percentage I have covered. I likewise look at time elapsed vis-a-vis distance covered as I am to finish in 5hrs and 30 mins.

Beginning 30kms, I was more sensitive with how my calves feel as I am worried about experiencing the so called “wall”. It was on my 36th kilometer that I felt that my calves are so heavy and hard at doesn’t want to move any more. I changed to heel strike to alter the way my feet hits the floor. At the same time, I asked the nearest medic to apply liniment and massage my aching calves and thighs. I didn’t stopped running. I just paused to medic and continue hitting the floor. I continue to sing my heart out, and greet the 21k runners that are on opposite direction. I maintained a positive attitude, kept smiling and I just realized that I was able to overcome the wall on my 37th kilometer.

When I was able to overcome the wall, I no longer do 4-1. I felt stronger and only walk for 30 seconds and try to maximize downward slopes or flat roads. The last 3kms further boost me to run stronger. I was no longer stopping, I was just running non-stop. I felt great that I was able to surpass more or less the same number of runners that surpassed me earlier that day. I am so happy and proud to finish strong. It was a very emotional finish, i just tried to maintain calm and prevent from bursting out as it is so hard to breathe and cry at the same time. I was smiling all throughout the race and nothing has prevented me from having this positive attitude. 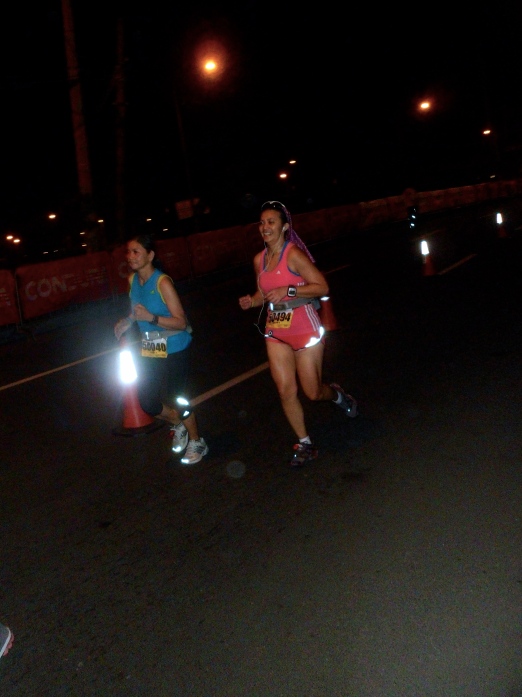 Running a marathon further strengthens my belief that nothing is impossible. When you desire something, and really worked for it, everything in the world conspires for you to achieve it (paraphrased from Paulo Coelho’s famous book – The Alchemist).  Nothing is impossible when you really worked for it. I further believe that I am stronger now and I am ready to face whatever this life can bring.