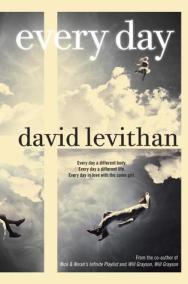 Short Summary of the book..

There’s never any warning about where it will be or who it will be. A has made peace with that, even established guidelines by which to live: Never get too attached. Avoid being noticed. Do not interfere.

It’s all fine until the morning that A wakes up in the body of Justin and meets Justin’s girlfriend, Rhiannon. From that moment, the rules by which A has been living no longer apply. Because finally A has found someone he wants to be with—day in, day out, day after day.

– If there’s one thing I’ve learned, it’s this: We all want everything to be okay. We don’t even wish so much for fantastic or marvelous or outstanding. We will happily settle for okay, because most of the time, okay is enough.

– I wake up thinking of yesterday. The joy is in remembering; the pain is in knowing it was yesterday.

– I want love to conquer all. But love can’t conquer anything. It can’t do anything on it’s own.
It relies on us to do the conquering on its behalf.

– The moment you fall in love feels like it has centuries behind it, generations – all of them rearranging themselves so this precise, remarkable intersection could happen. In your heart, in your bones, no matter how silly you know it is, you feel that everything has been leading to this, all the secret arrows were pointing here, the universe and time itself crafted this long ago, and you are just now realizing it, you are just now arriving at the place you were always meant to be.

– People are rarely as attractive in reality as they are in the eyes of the people who are in love with them. Which is, I suppose, as it should be.

– It’s one thing to fall in love. It’s another to feel someone else fall in love with you, and to feel a responsibility toward that love.

– When first love ends, most people eventually know there will be more to come. They are not through with love. Love is not through with them. It will never be the same as the first, but it will be better in different ways

– I have been to many religious services over the years. Each one I go to only reinforces my general impression that religions have much, much more in common than they like to admit. The beliefs are almost always the same; it’s just that the histories are different. Everybody wants to believe in a higher power. Everybody wants to belong to something bigger than themselves, and everybody wants company in doing that. They want there to be a force of good on earth, and they want an incentive to be a part of that force. They want to be able to prove their belief and their belonging, through rituals and devotion. They want to touch the enormity.
It’s only in the finer points that it gets complicated and contentious, the inability to realize that no matter what our religion or gender or race or geographic background, we all have about 98 percent in common with each other. yes, the differences between male and female are biological, but if you look at the biology as a matter of percentage, there aren’t a whole lot of things that are different. Race is different purely as a social construction, not as an inherent difference. And religion–whether you believe in God or Yahweh or Allah or something else, odds are that at heart you want the same things. For whatever reason, we like to focus on the 2 percent that’s different, and most of the conflict in the world comes from that.

– I am a drifter, and as lonely as that can be, it is also remarkably freeing. I will never define myself in terms of anyone else. I will never feel the pressure of peers or the burden of parental expectation. I can view everyone as pieces of a whole, and focus on the whole, not the pieces. I have learned to observe, far better than most people observe. I am not blinded by the past or motivated by the future. I focus on the present because that is where I am destined to live

– You like him because he’s a lost boy. Believe me, I’ve seen it happen before. But do you know what happens to girls who love lost boys? They become lost themselves. Without fail.

– I am always amazed by people who know something is wrong but still insist on ignoring it, as if that will somehow make it go away. They spare themselves the confrontation, but end up boiling in resentment anyway.

– Because when something happens, she’s the person I want to tell. The most basic indicator of love.

– I feel the universe is telling me something. And it doesn’t even matter if it’s true or not. What matters is that I feel it, and believe it.

– It is its own form of conversation — you can learn a lot about people from the stories they tell, but you can also know them from the way they sing along, whether they like the windows up or down, if they live by the map or by the world, if they feel the pull of the ocean.

– Are you a vegetarian?’ I ask, based on the evidence in front of me.
She nods.
‘Why?’
‘Because I have this theory that when we die, every animal that we’ve eaten has a chance at eating us back. So if you’re a carnivore and you add up all the animals you’ve eaten–well, that’s a long time in purgatory, being chewed.’
‘Really?’
She laughs. ‘No. I’m just sick of the question. I mean, I’m a vegetarian because I think it’s wrong to eat other sentient creatures. And it sucks for the environment.

– What is it about the moment you fall in love? How can such a small measure of time contain such enormity? I suddenly realize why people believe in deja vu, why people believe they’ve lived past lives, because there is no way the years I’ve spent on this earth could possibly encapsulate what I’m feeling. The moment you fall in love feels like it has centuries behind it, generations-all of them rearranging themselves so that this precise, remarkable intersection could happen. In you heart, in your bones, no matter how silly you know it is, you feel that everything has been leading to this, all the secret arrows were pointing here, the universe and time itself crafted this long ago, and you are just now realizing it, you are now just arriving at the place you were always meant to be.

– The tenderness between two people can turn the air tender, the room tender, time itself tender. As I step out of bed and slip on an oversize shirt, everything around me feels like it’s the temperature of happiness.

– I am made for running. Because when you run, you could be anyone. You hone yourself into a body, nothing more or less than a body. You respond as a body, to the body. If you are racing to win, you have no thoughts but the body’s thoughts, no goals but the body’s goals. You obliterate yourself in the name of speed. You negate yourself in order to make it past the finish line.

– Simple and complicated, as most true things are.